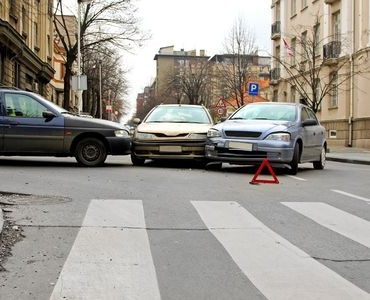 Determining fault for the injuries, deaths, and property damages caused by multiple vehicle collisions may prove challenging because numerous drivers’ recklessness, inclement weather conditions, defective car parts, or a variety of other factors may have contributed to the crash. Also known as chain reaction crashes, multi-vehicle pileups occur when one car hits another, causing the second car to hit a third, and so on until the last vehicle has no other cars to hit.

Liability in multi-vehicle wrecks may rest with a single car’s driver or the other motorists involved may share fault. Having initiated the domino effect, the driver of the first car may bear responsibility for the resulting pileup. If at the time of the collision any of the other drivers involved were acting negligently, they may also have liability for injuries and property damages caused by the crash. For example, the second and third drivers in a four-car collision may bear a portion of the fault for the accident if at the time of the crash neither had left a safe following distance between their vehicles and those in front of them.

Those who share responsibility for an accident or who seek to recover compensation from multiple people for injuries they suffered may do so. However, their share of the fault cannot exceed 50%. For instance, a jury may find the first driver was 70% at fault for causing an accident because he or she was speeding. The second and third drivers may bear 15% liability each because they were following too closely. Although they share in having contributed to the collision, the second and third drivers may still seek damages from each other and the first driver.

Drivers who share liability for causing an accident may only recover damages in proportion to the percentage of negligence attributed to the defendant or defendants. For example, a driver found 30% at fault for a multi-car accident may only receive $70,000, or 70% of a $100,000 judgment ordered in his or her favor.